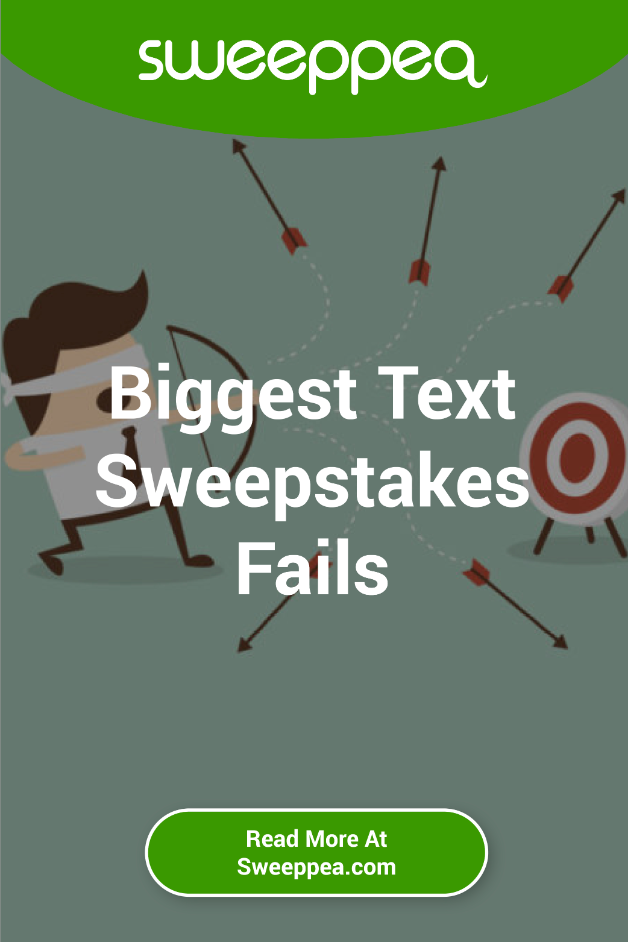 While we’re all for saving money, sometimes cutting corners on your text sweepstakes can really cost you. Unfortunately, not executing your text to win in the most advantageous way possible can mean that the hard work that you put in could go to waste.

To help you avoid falling into these traps, we’ve listed some of the biggest text sweepstakes fails.

Not Having Official Rules

Here at Sweeppea, we see this all the time. Companies think they that they are saving time and money by not creating official rules but it can hurt them in more ways than one. Firstly, having official rules protects your company against complaints and lawsuits from your text to win entrants.

Secondly, you could actually be breaking the law if you are not clearly outlining what the rules are for your campaign. Let’s say you’re a craft beer brewery but you didn’t write official rules that say only entrants over 21 are permitted to enter your text to win. You’re going to be in big trouble with regulators!

For another example of “no official rules” gone wrong, consider what would happen if a contest winner was unable to claim their prize for whatever reason. Then who would receive the prize? If you don’t want to get fined, shut down or end up in court being sued, always have official rules.

Also Read: Text to Win Features You Might Not Know About

Offering a Prize No One Really Wants

You saved money on a prize by offering a lifetime supply of weed killer to people who have ordered from your landscaping company. How exciting, right? Wrong!

When you make the mistake of offering a prize that no one actually cares about winning just to save money, you’ll only hurt your text sweepstakes campaign in the end. What will happen instead is that you won’t see as many entrants for your campaign as you would if your prize was actually something they wanted, such as a complete backyard landscaping redesign for a lucky winner or free lawn maintenance for a month.

Even if offering a prize, such as a vacation or new car isn’t viable for your industry, that doesn’t mean that you shouldn’t put any effort into coming up with an idea for a prize that will really get your customers excited about entering your text sweepstakes.

Not Using a Web Entry Form to Collect More Information

Every sweepstakes needs an alternative method of entry other than SMS as a general rule. In addition, you also need to collect additional information, such as your entrants email addresses if you want to continue to market to them after your sweepstakes has ended.

Ready to get started? To find out more about what has to offer Sweeppea and start your text to win, see features and pricing.